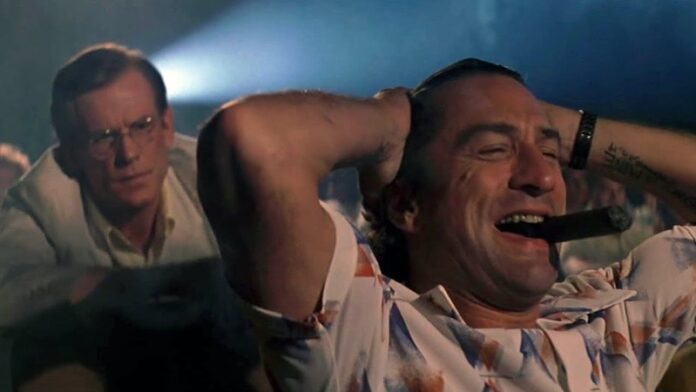 Throughout his career the Oscar-winning director Martin Scorsese he often found himself agreeing with the Hollywood studios on the realization of the projects he most cared about, provided that he also created more commercial works, which could be sources of guaranteed receipts. After making in 1988 for the Universal Pictures the film The Last Temptation of Christwhich the New York director had been thinking about for a long time, therefore found himself having to create a film that could be more marketable to the general public and the choice fell on what later became Cape Fear – The cape of fearreleased in 1991.

Written by Wesley Strickthe film is the remake of the 1962 title of the same name directed by J. Lee Thompsonwith protagonists Robert Mitchum And Gregory Peck. The story, belonging to the thriller genre, has naturally been updated to today’s canons, thus adding much more violence and tension. Steven Spielberginitially chosen as director, judged it even too violent, deciding to give it up in favor of Scorsese, definitively convinced by his friend and historical collaborator Robert DeNiro, already chosen as the protagonist. Scorsese therefore found himself confronted with a different work from his previous ones, in which however he managed to rediscover themes dear to him and to insert his own stylistic characteristics.

Scorsese, behind an apparent conformism to what were the canons of the nineties thriller, was in fact able to bring out reflections on redemption and on the complex relationship between good and evil, between crime and religious faith. What’s more, Scorsese seized the opportunity with Cape Fear to experience the most recent innovations in the field of special effects, combining them with a construction of images particularly influenced by the style of Alfred Hitchcock. Through the use of unusual shots, lighting and certain editing techniques, he was in fact able to give life to a work that was commercial but also deeply personal and built according to his own taste.

Cape Fear – The cape of fear: the plot of the movie

As for the plot of the film, this is the protagonist Sam Bowdena lawyer of great renown, married to the beautiful Leigh and with a fifteen year old daughter named Danielle. The three live quietly in a small town in North Carolina. However, their peaceful existence is turned upside down by the release of Max Cady, a man who served 14 years in prison after Sam failed to defend him adequately in a rape trial, to which Cady has always pleaded not guilty. So released from prison, he is a completely different man, eager to get revenge against the lawyer.

Cady therefore tracks down the man and his family, starting to torment them without ever leading to illegality. In fact, hers is configured as a very particular revenge: she doesn’t want to make Sam suffer, but to show him how those 14 years have changed him and at the same time reveal the falsehood of her seemingly perfect life. The lawyer, for his part, will try to defend himself as best he can, preventing those secrets that could actually compromise his working and family life from coming to the surface. The more dangerous the game between the two becomes, the more extreme the conditions they will have to go to in order to save themselves.

Cape Fear – The cape of fear: the cast of the film

To interpret the disturbing Max Cady is right there Robert DeNiro, who accepted the role enthusiastically to be able to give life to such a fascinating psychopathic character. For his part, he lost several pounds and better defined his musculature, so he came across as slight but physically menacing. De Niro then characterized the character by having the numerous tattoos that can be seen on Cady’s body applied and he spent five thousand dollars to have his teeth ruined (at the end of filming he spent another 20 thousand to have them fixed). In addition to the character’s body, De Niro then worked a lot on her way of speaking. The actor has in fact created a rather eerie Southern accent, with which he made his Cady even more terrifying.

For the role of lawyer Sam Bowden, however, it was initially thought to entrust the part to Robert Redford or Harrison Ford, but after Scorsese met Nolte at a gala event, he felt the latter was the right choice for the character. He too had to lose some weight, so as to be less imposing next to De Niro. Instead, the actress was chosen for the role of Sam’s wife, Leigh Jessica Langwhile Juliet Lewis plays daughter Danielle. For her interpretation of her, the latter was then nominated for an Oscar. Ileana Douglas plays Lori Davis, Sam’s lover, while Gregory Peck And Robert Mitchumthe protagonists of the 1962 film, appear briefly as lawyer Lee Heller and Lieutenant Elgart.

Cape Fear – The cape of fear: the trailer and where to see the film in streaming and on TV

For those who want to see the movie, you can enjoy Cape Fear – The cape of fear thanks to its presence on some of the most popular streaming platforms on the net today. This is in fact available in the catalogs of Rakuten TV, Chili Cinema, Google Play, Apple iTunes and Amazon Prime Videos. To see it, once the reference platform has been chosen, it will be enough to rent the single film or subscribe to a general subscription. In this way you will be able to watch it in total comfort and at the best video quality. The film is also present in the television schedule of Thursday 17 November at 00:50 On the canal Network 4.

Cape Fear – The promontory of fear: all the curiosities about Martin Scorsese’s film