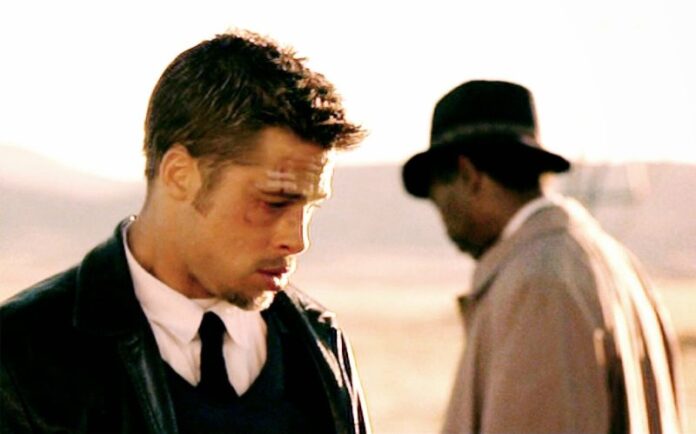 When one thinks of the contemporary thriller genre, one of the first names that come to mind is certainly that of David Fincher. Today known for works of great prestige such as The Social Network And The curious case of Benjamin Button, he gave birth in 1995 to what is still today considered one of the thrillers par excellence. It is about Seven, a film that helped rewrite the rules of the genre, laying the basis for numerous similar works later made. Despite having a classic story with a psychopathic serial killer, a malicious game orchestrated by him, and two detectives to follow his trail, the film has so much originality that it immediately established itself above the average.

The idea comes from the experience of Andrew Kevin Walker, who in the early 1990s was trying to establish himself as a screenwriter in New York. Here he ran into the squalor of the deadly sins, thus deciding to build a story starting from them. The project was then proposed by New Line Cinema to Fincher, who had just returned from the terrible experience of Alien³. The director saw in Seven the possibility of making a smaller film, through which to rediscover one’s passion for that profession. Attracted by the plot, he immediately decided to start working on it, composing a cast of great actors.

Once in theaters, the film established itself as an absolute success. Against a budget of only 33 million dollars, he came to collect about 327 million worldwide. In Italy it ranked fourth among the most viewed films of the 1995/96 film season. Seven it was also a success with critics, who praised the dark and violent atmosphere, the script and the interpretations of the protagonists. Finally, the macabre finale was also particularly appreciated. All this, together with numerous awards won, led the film to establish itself as a cult, marking a real moment of transition within the thriller genre. After Seventhis would never be the same again.

Seven: the plot of the movie

The protagonist of the film is the detective William Somerset, wise and elderly, he now finds himself experiencing a profound disillusionment with an increasingly violent and degraded world. A week after retirement, he finds himself flanked by the young and impulsive agent David Mills, who will take his place once the badge will be returned. Somerset thus begins to teach the young man the tricks of the trade, even if given the character differences between the two, no good blood immediately flows. However, the two suddenly find themselves investigating a particular murder. In fact, an obese man was forced to eat until he died. This episode is followed by that of a horrendously mutilated lawyer. On the corpse of this the two agents find the word “avarice” written.

Somerset and Mills suspect that a single serial killer is behind these murders, and that what he has done is connected by a strange relationship. Soon, with the succession of further murders, the two will understand that they are faced with a madman who punishes people guilty of the seven deadly sins with death. While trying to predict the next steps for this, Somerset and Mills form a good friendship, and Mills arrives to introduce his colleague his beautiful wife. Tracy. The moment the killer makes them understand that they know who they are, the life of the two agents and of those close to them ends up in danger. In a crescendo of madness, the circle is getting closer to closing dramatically. 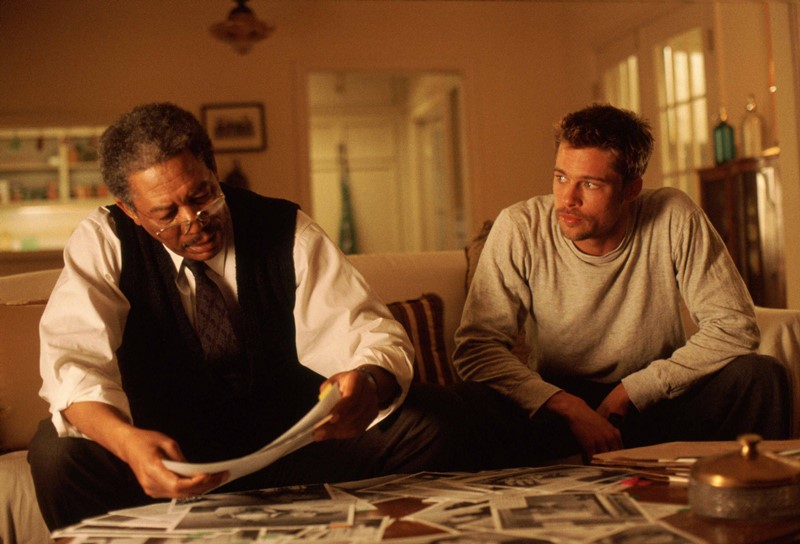 Seven: the cast of the film

Consisting of a cast of celebrated actors, the film stars the Oscar-winning Detective Somerset Morgan Freeman. The role was originally proposed to Al Pacino, who however refused. Fincher then decided to ask Freeman, though he was convinced that he too would deny his participation. To his surprise, the actor declared that he was particularly interested in the role, and was thus the first to enter the film. To play his role, he was followed by a real policeman, who explained how he could be more realistic. The young Mills is instead played by Brad Pitt, here on his first collaboration with Fincher. The actor accepted the role eager to take off the label from “Sex Symbol”. For the part, therefore, he tried to highlight the less fascinating aspects of the character.

In the role of Tracy, wife of Mills, there is instead the Oscar winner Gwyneth Paltrow. The actress was immediately the first choice for the role of her, but she declared herself not interested. On the advice of Pitt, he accompanied her at the time of her, but she agreed to meet Fincher, who was finally able to convince her to accept. The actor Kevin Spacey instead he plays the character of Jon Doe, who turns out to be the killer of the story. To maintain an aura of mystery about it, he asked that his name not be advertised, so as to make his entry into the scene a real surprise. The actor then finds himself in the film R. Lee Ermeyfamous for Full Metal Jacketas the police captain. John C. McGinleyknown for the series Scrubsis instead the leader of the SWAT team.

Seven: the ending, the trailer and where to watch the movie in streaming and on TV

The ending of Seven is now one of the best known and most shocking ever. It is the perfect conclusion to a dark and seemingly hopeless story. Precisely because of its great drama, the producers of the film did not want this to be the ending, and therefore decided to change it. In sending the script to Fincher, however, Fincher was mistaken in sending him the version with the original ending. Of course the director was delighted, finding it perfectly consistent with the tone. In learning of the will to change it, he strongly opposed this decision. Pitt also took his side, and he refused to act in the film if the ending was not the one with the famous box. Eventually, the producers had to give in to pressure, allowing for an ending that actually contributed to the film’s fame.

For fans of the film it is possible to enjoy this thanks to its presence on some of the most popular streaming platforms on the net today. Seven it is in fact available in the catalog of Infinity + And Amazon Prime Video. To see it, just subscribe to a general subscription, thus having the opportunity to watch the title in total comfort and at the best of video quality. The film will also be televised on the day Tuesday 2 March at 21:00 On the canal Iris.

Seven: plot, cast and finale of the film with Brad Pitt